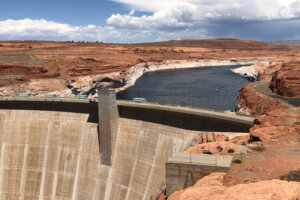 Will my Grand Canyon trip run even with the extreme drought? The quick answer is yes. Make no mistake, we are all hoping for an end to the drought, but Grand Canyon river trips will still be possible even if water levels continue to drop. At lower water, some rapids will be more challenging as more rocks become exposed and some will have bigger waves as rocks that were previously deep underwater get closer to the surface. You can still expect to have a great time rafting the Grand Canyon.

Grand Canyon river levels are a bit more predictable because the vast majority of the water is released from Lake Powell through the Glen Canyon Dam. Although Lake Powell’s level is very low, the amount of water projected to be released from Glen Canyon Dam in 2022 is only slightly below last year. 2023 projections won’t be available for several months as we wait to see what this year brings for precipitation and runoff. How can 2022 releases be close to normal? The explanation is interesting and complex and is beneficial for Grand Canyon river rafters.

In order to appreciate the scope of the issue – and also rafting trips overall – it’s helpful to get an idea of the history of water policy on the Colorado River. It begins with the “Law of the River”, a collection of compacts, federal laws, court decisions, and regulatory guidelines regarding the use of Colorado River water. The most consequential of these is the 1922 Colorado River Compact. This agreement among the seven basin states (CA, AZ, NV, CO, WY, UT, NM) governs the allocation of water to each state for all uses, including drinking water and agriculture. It is this 100-year-old, 4-page document that dictates how much water flows through the Grand Canyon into Lake Mead. There are some nuances to the amount that must be provided to the lower basin states (CA, AZ, NV) each year, but at a minimum, and in the most dire shortage scenario, 7 million acre-feet of water must flow downstream below Glen Canyon Dam each year. That equates to 10,000 cubic feet/second (cfs) per day over the course of the year. For perspective, the current median annual release is 8.2 million acre-feet or 12,000 cfs per day, which is considered near-normal in the post-dam era.

The amount of water released from the dam varies depending on the season and also fluctuates on a daily basis throughout the year. This is because Glen Canyon Dam is a hydroelectric dam and power generation needs are a major driver of how much water is released. Daily timing changes depending on the season, but the releases from the dam run like clockwork; so much so that a tide table has been developed for use by river rafters. Typically, flows as low as 8,000 cfs and as high as 13,000 cfs repeatedly occur in any given 24-hour period. The point is, the river is runnable at many levels, low to high.

While near-term projections for river flows are generally good news for river rafters, the lingering question remains: what is going to happen to the Colorado River if the drought continues for many years to come? This question is at the forefront of southwestern water policy and will likely lead to a renegotiation of the Colorado River Compact. The time period that was used as a basis for the average river flow (1905-1922) when the Compact was drawn up is now widely accepted to have been one of abnormally high precipitation. The current drought is likely a return to a natural cycle of much drier conditions. This, exacerbated by the effects of global climate change, leaves regulators with little choice but to rethink the Compact and its dictated water allocations.

To sum up, your river trip will be an adventure of a lifetime! Regardless of the status of Lake Powell and Glen Canyon Dam, the Colorado River will flow in some form or fashion. It’s been firmly entrenching itself for the last 5 million years and will continue to do so whether the water flows through the penstocks at the dam or eventually runs unimpeded. The rapids are still exciting and technical at lower flows, oftentimes more so than at higher flows since more water can actually wash out or “tame” the rapids. There may be some uncharted waters ahead, but we’ll be there to raft them!

BECOME INFORMED AND BE AN ADVOCATE

You obviously care about the place, the river, and the experience. We encourage you to learn a little more about the issues and policies that affect the Colorado River and become an advocate in any way that you can. These issues are of national importance and we hope that you’ll take part in ensuring that people can continue marking a Grand Canyon rafting trip off their bucket lists for generations to come.

Want to get involved? The Grand Canyon Trust is a great place to get started! They are a local non-profit focused on ecological conservation and restoration, as well as cultural preservation in the greater Grand Canyon region. Check with them for current information on policy updates, donate to the cause, or even join one of their volunteer fieldwork trips!